skip to main | skip to sidebar

I’m in northern Italy (again – this is the third time this January!) We are heading to Marrakesh, leaving Italy on Sunday in our R44, G-BZMG. 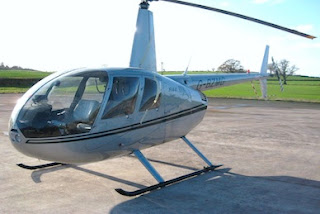 I had one of the most traumatic trips down to Italy – all weather related of course, and it took 4 days instead of the usual 1 or 2.

It was made a lot worse by the fact that a chap who left the same time as us from Cheltenham in a microlight en route to Australia decided to cross the channel on Monday afternoon, and didn’t make it. They found his body the next day.

It was all very poignant for me: he was the same age, shared the same name, was doing exactly what I did 10 years ago, we were flying at the time he was. The difference was that I made the decision to stay at Lydd, near Dover, rather than cross the Channel since I deemed the weather too bad to get to the other side. Clearly, and very sadly, I was correct. It’s hard to explain the pressure to go when the conditions are “not good”, but it’s very strong. By not going, I knew that we’d add at least a day to the journey time, the weather window was forecast to close on Tuesday night, and my two mates needed to be back in the UK by Thursday evening at the latest.

Anyway, it didn’t do much for our morale nor our confidence since on Tuesday the weather was only marginally better. We waited until about 13:00 and then headed out into the murk. Flying across the water at 350ft in near freezing conditions in light fog is never fun, and when the French coast appeared some 30 minutes later we were relieved, to say the least. 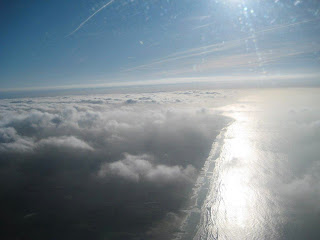 We headed down the coast towards Le Touquet. Along the coast we had lovely weather – sunshine, a bit of cloud here and there, but we knew it wasn’t like this for long. Having check the weather forecasts again and again before we left, I knew that there was no chance of us going the direct route, which was to the east of Paris – they’d closed the airport at Paris and that tells a tale in itself. Fog and snow.

So we headed due south and we planned to get to a place called Blois, near Tours. Having been doing this for a while, I have contacts all over the place and at Blois we could rely on my mate Patrick to help us out. Assuming we could get there, of course. 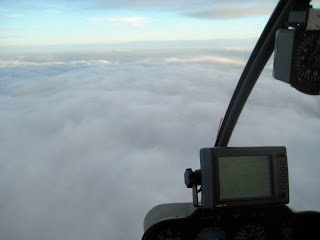 As we passed Le Touquet, I had another decision to make – do we fly above the clouds in glorious sunshine, or fly below the clouds in the drizzly gloom? I elected to go above, since there were some gaps in the clouds, so we could see the ground just in case we had to land in an emergency.

As we headed south, I made a “X” on the map each time we saw a sensible gap in the cloud, just in case we had to turn back if it became untenable to continue, or if the weather deteriorated further. But after an hour and a half of extremely stressful flying, we were within reach of Blois, and I’d had a text from Patrick telling me that he had “swept the sky at the airfield”. I found a gap in the clouds and slipped though it and continued the last few miles underneath the clag. Again, we were very pleased to have arrived at our intended destination: we’d made the correct decision – the weather below the clouds would have made the journey impassable in places.

So we went out for a lovely meal, and we all slept like babies that night.

Guess what the weather was like on Wednesday? Yep, more fog, this time with quite heavy rain. It was at this point that David and Andy had to bale out. They both had stuff to do in England, there was a TGV station at Blois, with an easy connection to the Eurostar. It was pointless for them to continue to head south in these conditions, with no certainty of getting to Cuneo at any time soon. So I said A bientot to them and waited. And waited. And waited. 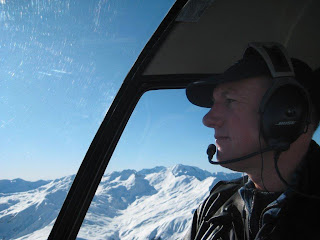 By about 12:00 the fog was lifting, but I knew the weather was going the same way as me, so had I taken off, in just a few miles I’d catch the fog and rain up and be grounded again.

At 14:30 it was time to go. I said goodbye to Patrick and headed off. I had a tailwind, and was covering the ground at nearly 150 miles an hour. Fantastic!

As I got down towards Lyon, the weather was back to what, for me, had become normal. Layered cloud, light rain, terrible visibility. I had intended to land at Grenoble, but the lovely Air Traffic Controller at Lyon told me that it was snowing, with a cloudbase of 200 foot and almost zero forward visibility. There are very big mountains all around Grenoble so I diverted to another airfield, and once again, called it a day. That night I got 10 hours sleep – it’s indicative of just how hard this type of flying is. I was obviously exhausted.

Thursday, I get up to slightly better conditions, and take off at around 10:00. I’ve only got 100 miles to go, but the Alps are in the way. The Alps are perhaps the most challenging part of the trip – the weather of course being the main problem. Nicely lodged in your mind, though, is the thought that if the aircraft goes wrong, it’s a long, long way down with very little chance of you being alive, let alone rescued! 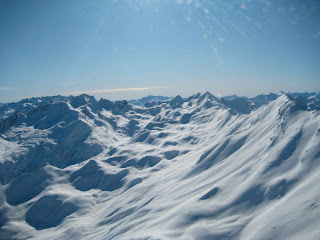 Heading directly across the Alps is impossible: I make one attempt, but have to turn back – the cloud is too thick, and there are no gaps to climb through whilst avoiding the mountains hidden within. Pilots call this type of cloud “Cumulus Granitus”, with the usual droll humour that seems to be prevalent in aviators of all generations.

So I head south, towards Valance, hugging the mountains, trying to turn east as soon as I can. I’ve got a tailwind again, which under usual circumstances would please me greatly, but heading over these big lumps of rock with a 30 mile an hour wind makes the trip very bumpy and unpleasant indeed. And you are always waiting for the Big One – the updraft that takes you into the cloud above or worse, the downdraft, that knocks you out of your seat (yes, it has happened).

But this time all is OK, and the further east I get, the nicer the weather becomes, and by the time I get to Gap, it’s blue skies, calm wind and glorious scenery. And it remains like this for the rest of the trip!

Now I’m in Cuneo, with another friend. On Sunday we are leaving for Morocco, and I’ll update you as the journey progresses.
Posted by Fly-Q at 11:15

Fly-Q
Leominster, Herefordshire, United Kingdom
We're enthusiasts, as well! So we know the whole rigmarole of finding a community with like-minded people. We love to talk flying, and you'll never be boring us, so you can feel free to ask us anything you like. Talking isn't the only thing we do. Fly-Q can be your one stop shop for all things aviation, whether you're looking to Buy an aircraft, Invest in an aviation business where your hobby could turn profitable or even look for flying friends to go off and fly with. There's a whole lot more here at Fly-Q, so go and discover!