skip to main | skip to sidebar

We wake up to the drizzle and low clouds that has been the main feature of the trip so far.

When I say we, I mean that I’m woken up by a call from Fulvio telling me the taxi is here to take us to the airport. 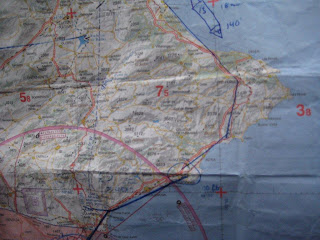 Bollocks, my sodding phone has mysteriously turned itself off during the night, hence no wake-up alarm. In 10 minutes I’m showered, dressed and downstairs. No time for breakfast (or so I thought).

Off we go to the airport, hoping that the refueller will be in for 09:00. But no, this ain’t going to happen, and although we are there well before 09:00, we are all alone. 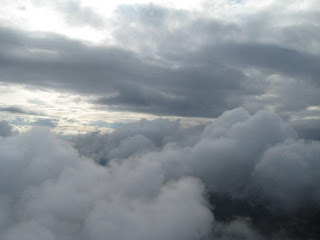 We start talking to the local flying school instructor, a chap called Petter. Amazingly, he knows Duncan and www.Veritair.com and has looked at several of the aircraft that my business, www.Fly-Q.co.uk has for sale. Even more amazingly, his colleague knows most of the people I know in the training arena – Leon Smith, Mike Green, Phil Croucher to name just a few.

They help us out a lot, with local knowledge, and rather crucially, the right maps for our next leg, since there was a bit of a cock-up on the map front. 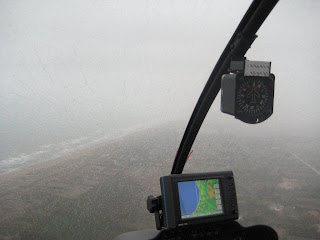 So off we go. The previous night Fulvio and I agreed that we would take it in turn to be PIC. Not just on the factual front, but also on the psychological front. We’d had a few differences of opinions on previous flights, and I felt it best to lay some ground rules down. This leg, it was Fulvio’s turn to be boss, the next leg it was my turn, and to make it even clearer, the boss sat in the right hand seat. 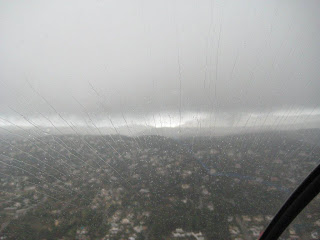 As usual, it was raining but not very much so after about 20 minutes we decided to leave the coast and track inland, which was a much more direct route. OK we knew there was some high ground, but there were also some valleys to follow.

An hour and a half later, we were virtually back where we had started. We simply couldn’t get over the last ridge – the highest one. The cloud was wall to wall. We were tantalisingly close to saving the 20 minutes, but we failed.

More importantly it meant that we couldn’t make our intended re-fuel stop at Almeria, instead having to divert to Alicante. Alicante is a BIG airport which meant BIG delays, and BIG bills. They call them “Handling Fees”, but for people like us in little aircraft, the main thing that gets handled is our wallets. We had a lot of mar-mar there, and it put neither of us in a good mood. 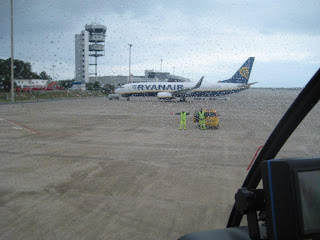 Anyway, it’s my turn to be PIC and we reckon we can make it direct to Tangiers from Alicante with a bit of luck and a following wind. So we file a flight plan to Tangiers, pretty much at the limit of our range, but do-able. And in case we cannot, we have Malaga as a diversion airfield

Off we go, and for once, we do get a bit of luck and a following wind. About 30 knots in fact and at this rate we’ll be in Tangiers in just over 2 and a half hours.

But of course things are never that simple. As the journey progresses, the following wind fizzles out, and the rain starts again. Fulvio wants to head in a straight line across to Tangiers – which means that we’ll have about 100 miles of water to cross, rather than the 8 miles I’d prefer by crossing at the Gibraltar Straights. We compromise and I start to head across the Mediterranean, with about 50 miles of water in front of us, and by now a stiff headwind. 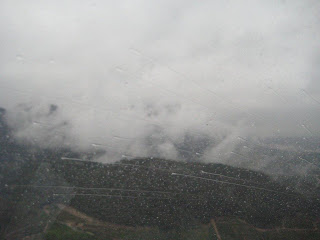 About 70 miles from Tangiers, and still over the middle of the sea, I start to voice my concerns about making it to Tangiers without running out of fuel. Sure, we’d make the coast of Morocco, but I didn’t think we’d make the last 30 miles cross-country. And landing at dusk in a random field in Morocco was not what I wanted to do. I got a weather report from Tangiers. Thunderstorms, embedded storm clouds, rain, 5000 meters forward visibility, with low cloud.

With a lot of fuel on board, that forecast wouldn’t actually put me off, but knowing that we had enough fuel (with a safety margin) to get to Tangiers with no aeronautical hold ups, no diversions and no nothing else to delay us, enough was enough. I turned BZMG around, and started to head back to Spain. 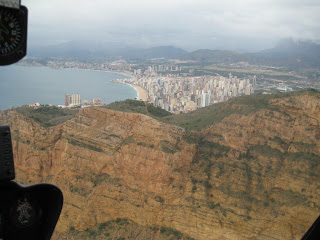 Fulvio doesn’t want to go to Spain, so we call up Gibraltar, and blag a permission to land there, having established that they had Avgas. About 10 minutes from landing, the air traffic controller calls up and apologises, he made a mistake – they have Avtur, but not Avgas. I should have guessed 20 minutes earlier when he said that they didn’t have 100LL, but they did have Avgas.

Bollocks. We turned away from Gibraltar and headed back to Malaga. What a wasted day, not to mention the wasted fuel and aircraft hours.

All for the sake of a 20 minute short cut in the morning. “The Coast is Your Friend” is the new mantra for the rest of the trip. 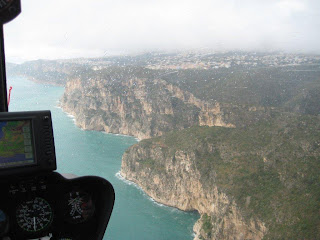 We do the usual formalities, get re-fuelled, fill in paperwork, find a hotel, get a taxi and leave the airport.

It wasn’t all bad – we treat ourselves to a session in a Spa bath which did wonders for my aching back and then it was the end of another day. We had planned to be in Tangiers tonight, Get-There-itus didn’t get-us. But only just.
Posted by Fly-Q at 19:40

Fly-Q
Leominster, Herefordshire, United Kingdom
We're enthusiasts, as well! So we know the whole rigmarole of finding a community with like-minded people. We love to talk flying, and you'll never be boring us, so you can feel free to ask us anything you like. Talking isn't the only thing we do. Fly-Q can be your one stop shop for all things aviation, whether you're looking to Buy an aircraft, Invest in an aviation business where your hobby could turn profitable or even look for flying friends to go off and fly with. There's a whole lot more here at Fly-Q, so go and discover!